Many people who matter, like my mom, children, and sometimes my husband, think I have some crazy ideas at times. They look at me crazy sometimes, even when I fantasize about having a black basement ceiling. However, they can’t see as I see in some ways.

Not saying they are less visionary than me, but I have proven them wrong sometimes. And now, they are slowly but surely seeing the beauty and value of black basement ceiling ideas. In fact, the following are 10 spectacular black basement ideas that may also have you in awe: 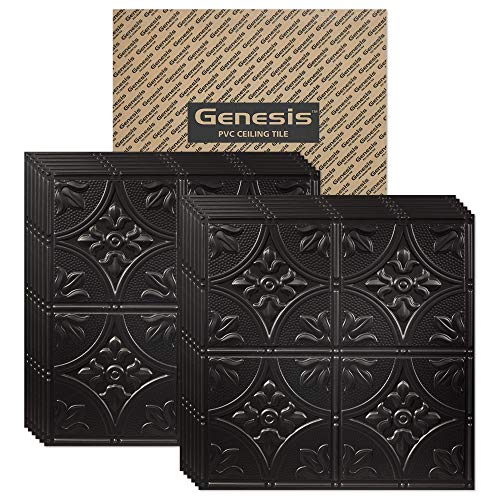 These beautiful black ceiling tiles have a plethora of great features. They are easy to install, easy to maintain, waterproof, durable, and fire-resistant. It is made out of high-grade PVC that prevents breakage. It also comes with a 25-year warranty, and all I have to do is peel and stick to the ceiling. Each pack comes with 12 tiles that are 12×12 inches each.

Black Ceiling With Grids That Accentuates

This beautiful basement was made possible by the black-painted ceiling with grids. Also, this black ceiling along with black furnishings and surfaces makes it have a uniform appeal.

The few splashes of color through the basement also make the whole look pop. I could add contrasting colors as well, and the look would still be awesome.

The Black Ceiling Makes a Difference To the White Walls

Imagine if this whole room was plain white. It would be just the boring and typical empty room. However, just slapping the black paint on the ceiling and pipes does wonders even though the room is empty. The sky is the limit in how to initiate interior design and make this room pop!

The Wonders of this Totally Black, Empty Room

Less is more may be a cliche, but it is profoundly true in many instances. This image is proof of that. In this case, the black ceiling and walls in this empty room are dramatic enough. The neon lights make it even more dramatic. I can only imagine how this room will be with furnishings added.

The Profoundness of Light in the Midst of Darkness

This abstract black basement comes with an opening in the middle for light to come shining in. Being another less is more example, the imagination can also run when creating a beautiful, cozy basement like this. I just keep in mind that safety is first.

This appealing look works well in the basement as well. This totally empty room comes with blue and neon lights, brick walls, and glowing light. I can see how a big screen flatscreen can be mounted on the wall right smack in the window. Adding furnishings without overcrowding the space with some similar or even some contrasting colors will also do wonders.

Imagining the Huge Difference if This Ceiling was White

This lady’s post testifies how she received multiple offers even when the weather there was horrible. This sentiment speaks volumes alone. Black ceilings make the architecture more interesting, and this image and testimony prove this fact.

Sure, this testimonial post talks about other amazing features of this home. However, it’s a great possibility that this basement with the black ceiling helped influence these customers’ offers. Otherwise, this lady wouldn’t have shown this picture.

As shown in this picture, the empty room is breathtaking with nothing in it. The black painted ceiling along with the installed lights on the corners and the light fixtures in the center makes a great difference. If the ceiling was white, it would be just a boring and typical empty room.

Spray painting the ceiling black is the easiest way to class up the basement. However, wearing safety glasses is definitely mandatory.

Black paint, whether sprayed or applied by a roller, also works well on an exposed basement ceiling painted black. Using a top-notch primer is mandatory, however. Primer prevents the paint color from yellowing over time. It also helps the paint to stick better to different surfaces, such as exposed pipes, wood rafters, ductwork, and wires.

So, how do we paint a basement’s ceiling black even if it’s an exposed ceiling painted black? This is how: The wood rafters and beams soaked up tons of the primer, so I will need a lot less paint.

One of the pics I shared looks nice in a restaurant as a night sky kind of look. Then, using a top-notch brand, like Sherwin Williams caviar flat and two coats, and finish remodeling. With such quality, I couldn’t go wrong as long as I kept proceeding accordingly. Black paint does amazingly well at concealing blemishes and discoloration.

As shown in that picture I’m referring to, the basement ceilings were painted black with a spray painting job by a person named Bryan. I wonder if Bryan does jobs on painting, because I wouldn’t mind getting his work if my ceiling would look that good? Nevertheless, back to the subject at hand.

Anyway, it’s good to choose the color in a standard way. Although our primary goal was to paint the exposed basement ceilsing, we also decided to paint the cemented basement walls the same color.

That makes it look like any other room in me house. After priming, it’s time to paint. Tales of painted basement ceilings and poles.

Sherwin Williams black basement ceiling paint. Chuck is an amateur carpenter and diy weekend warrior. This helps me to work longer without having to take a break.

A basement ceiling painted black makes the space more dramatic. So, say, for instance, I take out the finishes and furnishings. The black ceiling would make the space more interesting than a humble plasterboard box. And so, there is more architectural interest with a black ceiling.

A basement ceiling painted black makes the space more dramatic. So, say, for instance, I take out the finishes and furnishings. The black ceiling would make the space more interesting than a humble plasterboard box. And so, there is more architectural interest with a black ceiling. 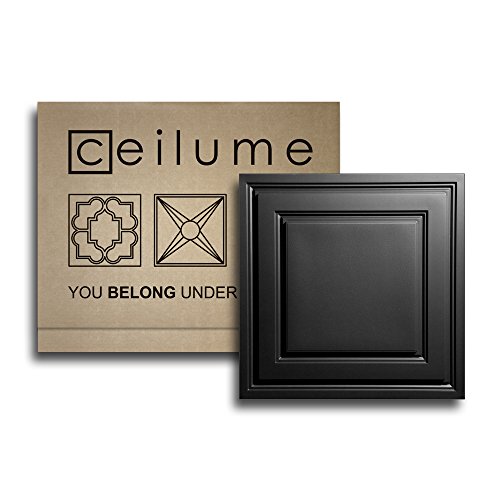 These black ceiling tiles also have a plethora of wonderful features. They are easy to install, easy to maintain, waterproof, durable, and fire-resistant. The following are more details:

Stratford ceiling tiles are perfect for use in any standard 1″ (aka 15/16″) T-bar drop ceiling grid. Their flush profile makes them great for use with canned lighting, and it makes them easy to cut down to size for use at the edge of your ceiling grid.

Our 10-pack of tiles covers 40 square feet of a drop ceiling. Pull old mineral fiber ceiling tiles out of your grid, and pop our Stratford in for an instant upgrade! Cut tiles down to size at ceiling edges with a pair of scissors or tin snips.

How to spray a basement ceiling black. Because I wanted everything on the ceiling black, I had the boxes installed before I sprayed the paint.

1. Should I Paint my Basement Ceiling Black?

2. How Much Does it Cost to Paint a Black Basement Ceiling?

It costs around $1,000 to $3,000 per 1,000 square feet to paint a ceiling, and it’s worth it. Using black paint is a good and inexpensive way to blend the exposed ducts, electrical work, and beans together. And as a result, you will pay half the cost of a dropped ceiling as all the electrical, beams, and ductwork seemingly disappear.

3. What Does a Black Ceiling Do for a Room?

Black ceiling designs create a feeling of a comforting and safe interior design. They also make the room have a taller appearance and not closed in or smaller like some may think.

4. Should You Paint an Exposed Basement Ceiling Black or White?

It mainly depends on what your preference is. It also depends on whether the ceiling has many flaws. White paints require more coats paintings, especially if you have a few minor flaws. Otherwise, white paint won’t be the right choice.

Also, we all must use a special primer before painting, regardless of the color paint used. Primer prevents the paint color from yellowing over time. It also helps the paint to stick better to different surfaces, such as exposed pipes, wood rafters, ductwork, and wires. And if preferred, we also can easily achieve lighter painted colors when using primer. For example, a primer that makes painting a black ceiling white is a lot more doable.